Lukeland is a nation that can be found in the mid-north of the NSC continent. It consists of one large piece of mainland and six islands. Lukeland is neighbours with Zaprya, Viola Per Sempre and Carpatina.

Despite being an enviromental country, Lukeland also boasts lots of the largely inhabited cities are full of skyscrapers and luxury apartments, Likeable to Shanghai in the other world.

Lukeland began participating in Nation Song Contest at the start of the 39th Edition, debuting along with Mysticland and Celeja. LTV sent the most popular Lukelandic artist, Little Boots to Bokia who turned out to be a popular entrant, placing 2nd in the first Semi-Final and 13th in the final. Lukeland withdrew in NSC 62 in order to dedicate it's programming to more environmental issues. However, due to a change of government, the nation came to re-participate in the contest in it's 119th Edition. 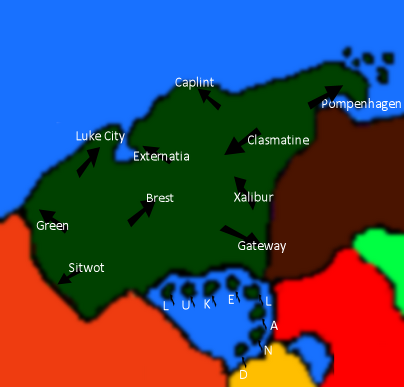 Lukeland entered the Nation Song Contest after the 38th Edition. Lukeland is known to surprise people with the countries entrants, as the genre they send each edition is usually very different.

† NSC 123 was declared as an #inconstentedition by the state of Lukeland, due to the inconsistency of the rules which the host followed. As a result, the nation's points were not counted in the semi-final. Had they been counted, Lukeland would have qualified to the final.

From NSC 99, Lukeland decided to return to the waiting list for Nation Song Contest after a long break. As a substitute for the main contest, the nation chose to participate in the Waiting List Song Contest from Edition 46.

Lukeland in Festivali i Convos

While Lukeland was in the Waiting List for NSC, they were a regular participant of MSN NSC NG. After the nation's break of NSC activities for over 40 editions, Lukeland began to take part in the Skype edition of MSC NSC, 'Festivali i Convos'.