These are statistics about nations participating in Nation Song Contest, and the NSC self. The contest is now in the 24th edition so the below is a brief overview of the statistics arising from the contests so far.

*Some stats may be out of date, efforts will be made to update these soon*

In this table you can see how many participants there were per edition, and how many of those participants voted in the semi-final and in the final. The reason why some editions have fewer voters than participants is that sometimes a nation fails to vote. Microstate Qualification has been introduced in NSC 10, which made it possible to have more participants than 42. Since NSC 14 the microstates who weren't able to qualify were obliged to vote in the semi-final and the final. [ NSC 30]] has been the most crowded edition to date, with 60 participants. In the final of NSC 22 a record number of 7 nations failed to vote.

Up to and including NSC 15 a total of 498 top marks of 12 points have been awarded in the NSC finals. This takes into account entries that have not voted.

As you can see by the table below the winner does not always get a lot of top marks. The exception to this is the winner of NSC5, Bokia which is the most successful entry in NSC history. The reason for this seems to be the varied musical tastes of NSC Nations. The list below shows each winner of NSC and the 12 points received versus the 12 points available. The least successful is Calypso in NSC54 which won the contest only receiving 1 x 12 points.

One way of judging how 'successful' a song is is the percentage of the possible points it could get in total - i.e., if it received 12 points from every voting country other than itself, it would have 100%. Applying this formula to all the entries since NSC 5, we see that these are the most succesful songs:

So this makes the oldest entry in this list by far the most successful entry to date.

The table below gives info on every country entered in Nation Song Contest. The infomation is
To sort on a column, just click on the arrows next to the column heading.

After every edition Sean (Cydoni-Gibberia) calculates the NSC League. This table differs with the overall standings: it doesn't calculate the total scores, but only awards points when a nation has reached top 10. 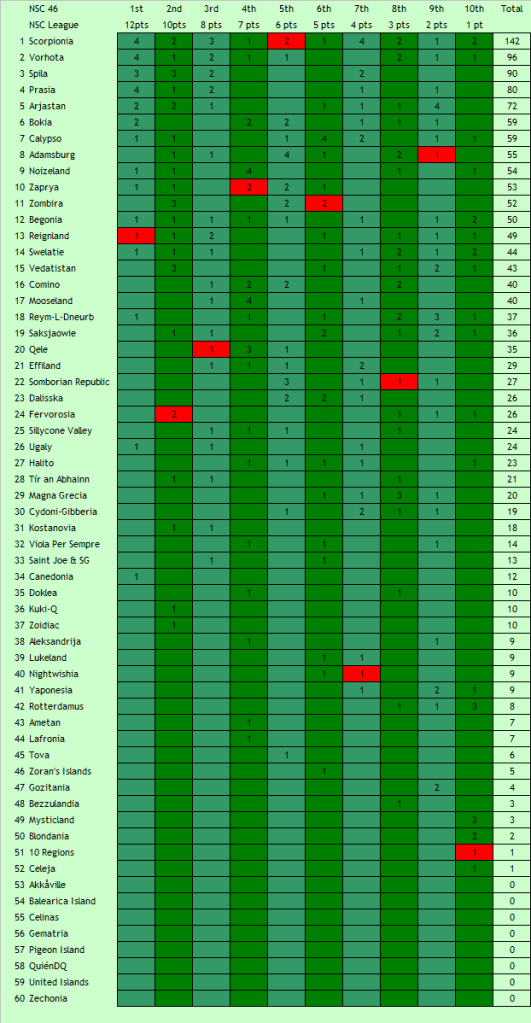 All in all, 82 countries have entered the Nation Song Contest at least once. But these are the countries who have been waiting longest for their first/next win:

Other nations who no longer enter with a long wait since their first won include Tomstria (23 years), Andromeda and Salona (22 years each) and Venera (21 years). Medina first entered in NSC3, and is still waiting for a win as a part of Comodina. Brugia, Maccha-Bently and Cicvara never won as independent states in their own right, but have since won as parts of Maccha-Brugia and Spila respectively.

Up until now, 47 nations have hosted either a main NSC or a spinoff of NSC. Below is a list of the Top 14 hosts (all of them with at least 3 hosted editions), who have hosted the most NSC events. This list does not include Jeux Sans Frontiers, NSC Games or the NSC World Cup.

Retrieved from "https://nsc.fandom.com/wiki/NSC_statistics?oldid=22110"
Community content is available under CC-BY-SA unless otherwise noted.